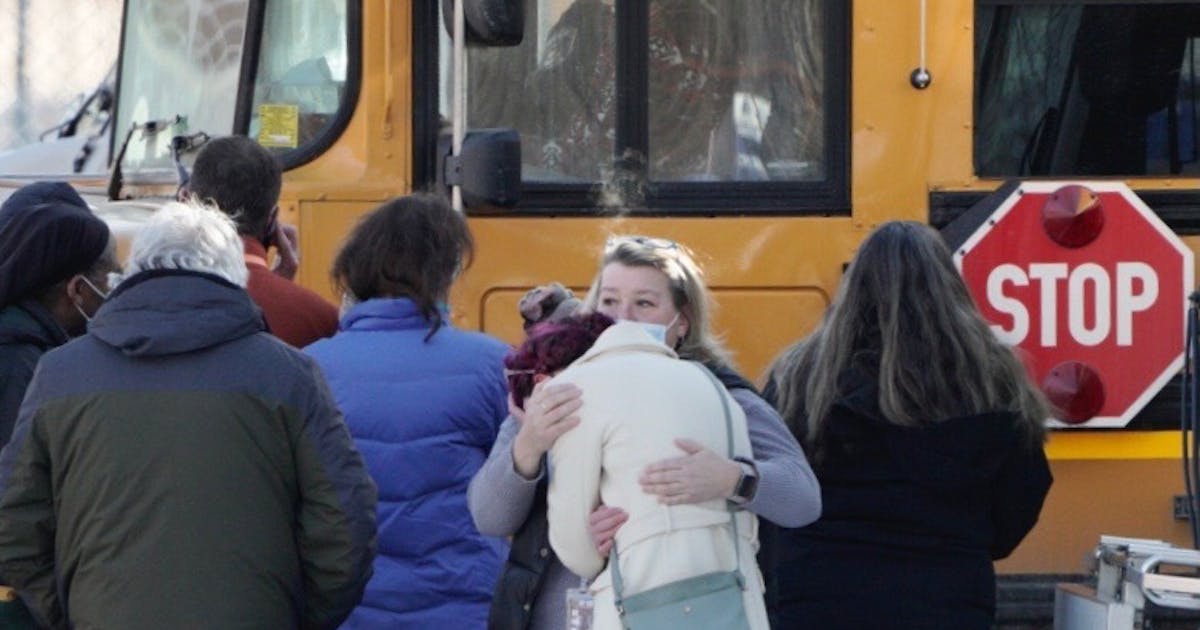 Authorities arrested two suspects Tuesday night after one student was shot dead and another severely wounded in a midday attack outside the main entrance of a school in Richfield.

The shooting happened on the sidewalk outside the South Education Center, an alternative school in the Intermediate District 287 that serves students from pre-K to age 21. Police found the two students wounded outside the school, in the 7400 block of S. Penn Avenue, Richfield Police Chief Jay Henthorne said.

Richfield police Lt. Brad Drayna said two suspects were arrested just after 6 p.m. Tuesday after police executed search warrants at two Minneapolis addresses and recovered a handgun. Drayna did not identify the suspects but said the department was not looking for any more suspects.

Medical personnel took the students to HCMC by ambulance, and one of them died there. Emergency dispatch audio disclosed that one of the students was shot in the chest.

“This is a tragic day in the city of Richfield,” Henthorne said at a news briefing about 2½ hours after the shooting. “Our … hearts and prayers and thoughts go out to District 287 students, their families and their community.”

The student who was killed was 15-year-old Jahmari Rice, said close family friend Damik Bryant, who organized a candlelight vigil Tuesday night outside the school. It’s the second searing death for Bryant, whose brother Daunte Wright who was killed by a Brooklyn Center police officer during a traffic stop in April.

Rice’s friends and teammates at the scene described the sophomore as energetic and funny, always making those around him laugh. Rice’s world revolved around football. In the summer, he was often found in the workout room.

“He really wanted to go far,” said friend and former teammate Merrick Woods, 15. “I’m gonna be doing it for him here on out.”

Rice’s cousin, Deonte Turner, 15, said Rice “was a real good person. He wanted to make it big in football.”

Dan Johnson Jr., 13, who used to live down the street from Rice, said the killing left him “speechless.”

Cesar Castillejos, who runs the Richfield nonprofit Young Life, said he just saw Rice walking in their neighborhood Tuesday morning. He frequently gave Rice rides home from church over the past four years when Rice attended the youth group.

When he heard about the shooting and that Rice was involved, he called and texted him in vain: “Call me back.”

Castillejos said Rice was living with his grandmother and that “he flourished” when he found purpose and community on the football field. He heard about “some issues last week at school” that meant Rice would be attending the alternative school.

“He wasn’t perfect. No one is,” he said. “He knew the right thing [and] didn’t always do it. He wanted to grow. He wanted to be better.”

He told Rice’s friends: “Tune out the noise, remember who he was and honor him by making choices that will make a better community.”

Tuesday was Rice’s second day at the South Education Center, said Kris Pulford, the head football coach at Richfield High School, where Rice played as a freshman and as a sophomore this past season.

“When he had things going, he was very intense, a very positive kid,” Pulford said of Rice, who earned a bit of time on the varsity team last season. “He stood up for his buddies, and he loved the game of football.”

Pulford said Rice transferred to his new school “just so he could find a place where he can be successful. Jahmari had heart. He was a good kid.”

Bryant described Rice as “happy, funny” and a fan of video games.

Rice’s father is Cortez Rice, who is in jail on charges of trying to intimidate Hennepin County Judge Regina Chu, who presided over last month’s manslaughter trial of former Brooklyn Center police officer Kimberly Potter. Potter was convicted of the April 2021 killing of Daunte Wright and is awaiting sentencing.

“I hope that this wakes the city up,” Bryant said. “We need change. We’re out here fighting for the community, and the community takes Cortez’s son. That makes no sense.”

Cortez Rice’s attorney, Jordan Kushner, confirmed that his client’s son was the student who died.

Kushner said Rice has a hearing scheduled in his case and he will push that his client be let out of jail as the case continues.

“He should be able to go home from jail,” Kushner said. “His son is killed. … He would have been taking care of him.”

District 287 Superintendent Sandra Lewandowski spoke at Tuesday’s news conference and said, “It is with an exceedingly heavy heart that we learned earlier today there were shots fired outside of the South Education Center near the front entrance.”

Lewandowski went on to say that “we expressed our deepest condolences to the families and friends of the victims.”

She called the shooting “a terrible tragedy and loss. We are deeply saddened and will do everything we can to … support the families, classmates and staff in whatever way possible. There are no words to describe the bravery exhibited by our staff and local authorities today. No one should ever have to respond to a tragedy like this.”

“We know that one young person will not come home to their family tonight,” Walz said. “My heart breaks that a young life was lost as the result of gunfire.”

South Education Center is part of Intermediate District 287, which covers 11 cities in the west metro and serves students with emotional and behavioral disorders and severe autism.

In September, a student brought a gun to South Education Center in his backpack. The student did not threaten to harm anyone, and “everything was handled swiftly,” school district spokeswoman Rachel Hicks said at the time.

Hicks added that South Education Center phased out the use of metal detectors at school entrances.

The district in recent years removed all school resource officers and replaced them with student safety coaches to focus on building relationships and working on mental health issues.

Law enforcement agencies from across the metro quickly staged outside nearby St. Richard’s Catholic Church. Agencies on the scene included the Hennepin County sheriff, and police from Eden Prairie, Richfield, Edina and Minnetonka, along with a Metropolitan Airports Commission Mobile Command Center.

Officials with the Richfield School District were reaching out to parents Tuesday afternoon.

Around noon, local police and emergency medical personnel “accidentally” arrived at nearby Richfield Middle School, Principal Erica Barlow wrote to families. Officers in bulletproof vests reportedly had their guns drawn, Barlow wrote, but left “as soon as the mistake was realized.”

“It is unlikely that many students witnessed the event, as they were in class at the time. However, it is important that you are aware of the incident in the event that your child hears about it, as some children may be deeply impacted by this type of news,” Barlow wrote.

As dusk fell Tuesday, the area of the shooting remained surrounded by crime scene tape, blocking access to the school grounds. A number of police vehicles and a State Patrol car blocked the main entrance.

Across the street, Chaz Neal, a friend of Cortez Rice, said he drove from Red Wing to offer his support. Standing in the parking lot of the church adjacent to the school while wearing a Black Lives Matter shirt, he said, “We need to put the guns down. We need transparency.”

Allegra Kennedy of Minneapolis also stood in the parking lot and said she was a friend of Rice.

Correction:
A previous version of this article incorrectly identified the student who was killed as a middle schooler.