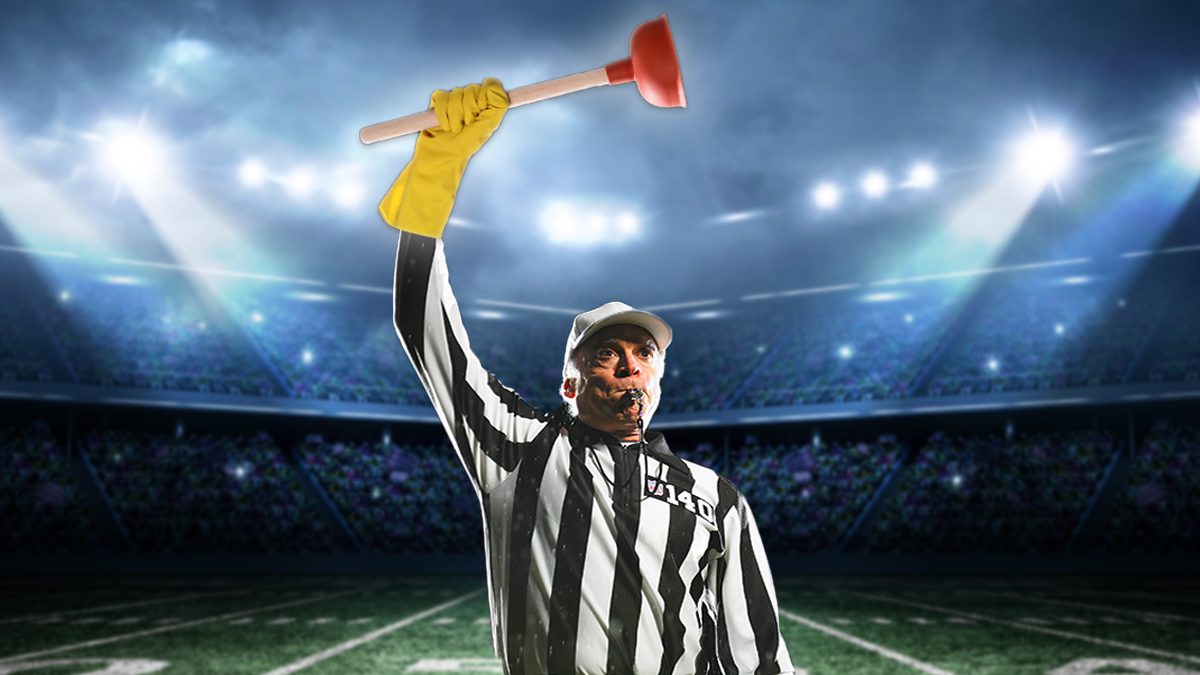 Here’s some not-so-pleasant food for thought: As we gather around the TV this weekend to root for our favorite team and chow down on chicken wings, pizza, and buffalo dip, some major plays are happening behind the scenes in your home’s plumbing. That’s right—your pipes can easily take a sack on Super Bowl Sunday.

“No one wants to worry about drain clogs and damage to their plumbing system when they are supposed to be having fun watching the game,” says Mike Mushinski, president of bluefrog Plumbing + Drain. “When guests are over, it’s easy for plumbing mishaps to happen, when there are large amounts of food and an uptick in the use of toilets and garbage disposals.”

Indeed, after Thanksgiving, Super Bowl Sunday is the day we Americans chow down on the most food of the year, according to the United Food and Commercial Workers Union.

Not surprisingly, that means the average caloric intake for Americans on the biggest day in football is a whopping 2,400 calories.

And here’s a warning of a gross fact ahead: During the game, Americans will end up flushing about 13 million pounds of poop—equal to 13 million footballs.

Bottom line? Your plumbing system is bound to get a real workout this Sunday, so ensuring that your pipes are in fighting shape is crucial—you don’t want to miss that 90-yard touchdown return because you’re in the bathroom with a plunger.

To help you avoid any pipe penalties during this year’s game, here are some top plays from the plumbing playbook.

You know that using too many squares of toilet paper can clog a toilet, but it turns out the TP’s ply matters too.

“One-ply toilet paper puts less stress on pipes and goes down smoother than two-ply toilet paper,” says Sewell. “When you have guests over, make sure to take two-ply out of the game and sub in the one-ply paper. Also, keep a plunger handy to assist in the event of a clog.”

While the pandemic made Americans obsessed with wipes (and lifted manufacturers’ fortunes overnight), their use in toilets is a big no-no. Thick wipes can potentially stay intact long after flushing and cause plumbing, sewer, and septic system problems.

“Flushing disposable wipes can lead to clogs in your plumbing system,” says Sewell. “Intercept any guest trying to flush wipes down the toilet.”

So if you use wipes, hide them when you have guests over.

3. Eject oil and grease from the game

Greasy, oily food can do a number on pipes, so be careful how you dispose of them.

“Never pour leftover grease down the drain,” says Travis Sewell, a franchise business coach and licensed plumber for bluefrog Plumbing + Drain. “As it passes through pipes, it can cool, harden, and cause a clog in your pipes.”

Doyle James, president of Mr. Rooter Plumbing, a Neighborly company, advises you to jar grease and trash it instead.

“It may be liquid when it hits the bowl, but as soon as it congeals, it becomes a pipe-clogging wax,” says James.

In 2020, the National Chicken Council projected that Americans would eat a record-breaking 1.4 billion chicken wings over Super Bowl weekend. Sure, you might like your spicy chicken wings dipped in ranch. But your plumbing system? Not so much.

“Putting chicken bones down the garbage disposal is sure to result in a loss,” says Sewell. “Bones can cause the blades to get jammed and cause clogs, because they can catch other debris if they make it past the blades. Pass those scraps to the garbage can instead.”

5. Starches and fibrous foods stay on the bench, too

While “garbage” and “disposal” are in the name, the contraption in your kitchen sink is not, in fact, a garbage receptacle.

So remember this: Even though fibrous foods, such as celery and potato skins—as well as starchy foods like pasta and potatoes—are popular game day foods, they can also cause a plumbing headache when they create clogs that are hard to clear.

“Dispose of any leftover food on dishes in the trash, not the garbage disposal,” says Sewell. “Overloading your garbage disposal with too much at one time can cause damage.”

It’s no fun being stuck with cleanup, especially if your team has lost the game. But if you’re facing a stack of plates covered with greasy sauces and hardened cheese, try to avoid making the cleanup any worse than it needs to be.

Before switching on the dishwasher, run hot water from the faucet in the kitchen sink until the water gets very hot. This trick will prevent the wash cycle from starting with cold water, which will congeal what’s on your plates.

“And always dispose of leftover food scraps from dishes into the trash before washing or rinsing,” adds Sewell.

December 8, 2022
‘The extra we pulled again the carpet, the extra we noticed’: what I discovered once I purchased a area with a dismal previous | Assets