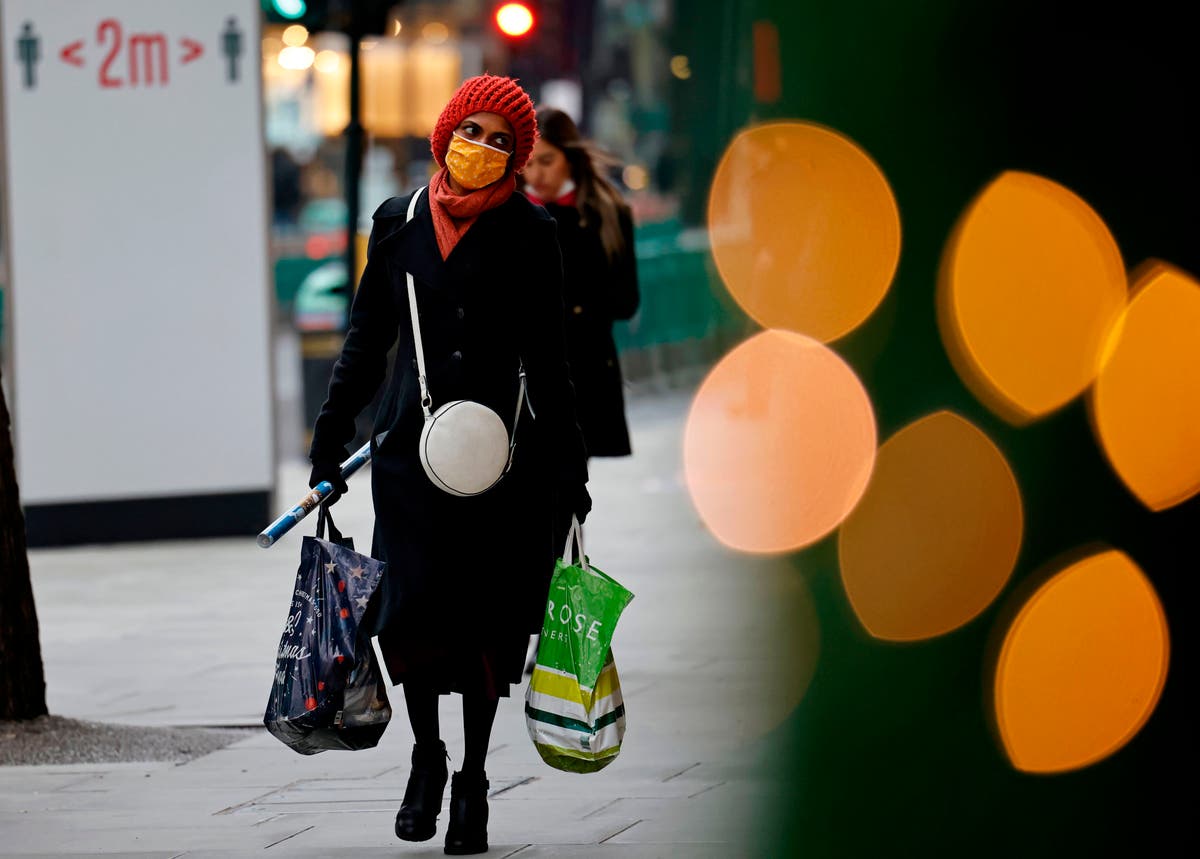 Downing Street has repeated that there is “no plan to move to plan B”, insisting that its proposed measures – which include mandatory face masks, home-working guidance and vaccine passports – are not needed to drive down the current rise in coronavirus infections, hospitalisations and deaths.

Hours earlier, Professor Peter Openshaw, a member of the government’s New and Emerging Respiratory Virus Threats Advisory Group (Nervtag), had warned the current infection rate in the UK was “unacceptable” and “astonishingly high” compared to “most other west European countries”.

Nearly 37,000 new cases and 38 deaths were reported in the UK on Monday, with these figures excluding Wales due to a “technical issue”.

Meanwhile, as soaring infections breed concerns of another disrupted festive season, Sajid Javid suggested that Christmas will be “normal” this year if people continue to come forward for vaccines and make use of regular testing.

Mr Javid also said that exclusion zones outside schools were an option to prevent “idiot” anti-vaccination protesters spreading “vicious lies” to children, after the Association of School and College Leaders said that 79 per cent of schools it surveyed had been targeted by anti-vaxxers.

That’s us wrapping up the liveblog for today, thanks for following here.

You can find all of The Independent’s latest reporting on the pandemic and the NHS here.

Or else keep scrolling to read about the day’s events, as we reported them.

Good morning and welcome to The Independent’s rolling coverage as pressure continues to build on the government to respond to high Covid case rates across the UK.

He suggested ministers should be giving “clear leadership” on the issue of face masks and working from home in order to curb the spread of the Covid.

Prof Openshaw said: “I don’t think it’s a binary go for plan B or nothing, it’s very clear that the measures that are in included in plan B are sensible and not very disruptive.

“It’s not problematic to give clear leadership about the use of face masks, and working at home if you can is also not particularly disruptive for many people.

“Those measures are likely to lead to a pretty good reduction in the really unacceptable number of cases that we’ve got at the moment.

“To my mind, the introduction of vaccine passports is also fine – it’s been accepted very easily in most other western European countries.

“It’s very sensible, if you were going into a crowded indoor space and knew everyone there had been fully vaccinated and perhaps had had a rapid test on the day, you’d feel much more secure about going into that space.”

He added: “What we’re facing at the moment is unacceptable we’ve got roughly one in 55 people infected, which is an astonishingly high rate compared to most other west European countries.

“This is connected with the lack of clear messaging about sensible measures that we should all be taking in order to reduce the spread of infection.”

Get your booster jab, NHS and government tell public

A senior health chief has urged people to get their Covid booster jab as the NHS sends out a further two million invites this week.

NHS medical director Professor Stephen Powis said infection rates are rising, while the government again ruled out a move to its coronavirus plan B despite calls to bring in measures to curb the spread of the virus.

NHS England said more than 5 million people have already been given the additional jab since the vaccination programme began administering them last month.

Exclusion zones outside schools are an option to prevent anti-vaxxersspreading “vicious lies” to children, Sajid Javid has said.

The health secretary’s comments came after Priti Patel said it was “completely unacceptable for children, teachers or parents to be intimidated and harassed outside their schools”.

Earlier this month the Association of School and College Leaders (ASCL) that 79 per cent of of schools surveyed had been targeted by anti-vaxxers.

This year we will have a ‘normal Christmas’, insists Javid

Sajid Javid has said he believes “we’ll have a normal Christmas” this year as fears of another disrupted festive season grow off the back of surging Covid case rates.

He told BBC Breakfast it is not necessary to implement plan B of the winter Covid-19 precautions “at this point”.

Asked about Christmas, he said: “This virus, we’ve seen already, what we know about it is it is unpredictable and I don’t think any sensible health secretary across the world would want to predict exactly where we’re going to be in three months’ time, or six months’ time, not least because there’s always the risk sadly of a new variant that could be more dangerous.”

But he said the best thing to do is get vaccinated and take daily precautions.

He said he “of course” agrees with Boris Johnson that it will be a better Christmas than last year.

Sajid Javid said he will wear a mask in the House of Commons chamber on Budget Day because it will be crowded.

He stopped short of again urging Tory MPs to mask up as he told BBC Radio 4’s Today programme: “If I’m in the chamber on budget day, given it will be packed, I will be, yes.

“The guidelines are clear, it’s for people to make a personal decision on how they see the risk of them and those around them, and this is obviously a workplace setting, so it’s going to be a decision for them, but I can speak for myself.”

During his media round this morning, Sajid Javid also said a final decision on making vaccination mandatory for all NHS staff had not been taken yet “but it is something that I’m heading towards”.

He told Times Radio: “We’ve been very clear and open about this, working with our friends in the NHS, and the reason for this is if you’re working in the NHS, that fantastic work you’re doing every day, you yourself are more susceptible to this virus because you’re just much more likely to come into contact with it, but also the people that you’re looking after are more vulnerable and that’s why they’re in hospital, they’ve got health needs, and this is about protecting them and protecting yourself.”

On moving to plan B, he said: “At the moment… we don’t think the data shows that we need to move to plan B but that said, it’s really important that we all keep playing our part and that means getting vaccinated, especially if you’re eligible for the booster jab please come forward, and also just being cautious on a daily basis and following the advice.”

Mr Javid also said it is “impossible to know” whether the NHS backlog will be cleared within three years despite spending billions to help solve the issue.

He said the waiting list is 5.7 million people at the moment but he estimates that it could be as high as at least 7 million.

Pressed on when it would be solved, he told BBC Radio 4’s Today programme: “I’ve been very open about this, it’s going to go up before it comes down.

“I’m not going to put a number on it – it’s impossible to know because I don’t know how many people will eventually come back to the NHS.”

Is the government delaying plan B until after Cop26?

Sajid Javid has denied speculation the government is delaying the introduction of so-called plan B restrictions until after the Cop26 global climate summit in Glasgow has concluded.

For up-to-date politics news delivered to your inbox for free each weekday morning sign up to our Inside Politics newsletter by clicking here.

At the same link, you can also receive the latest news direct from our chief political commentator John Rentoul in Westminster.