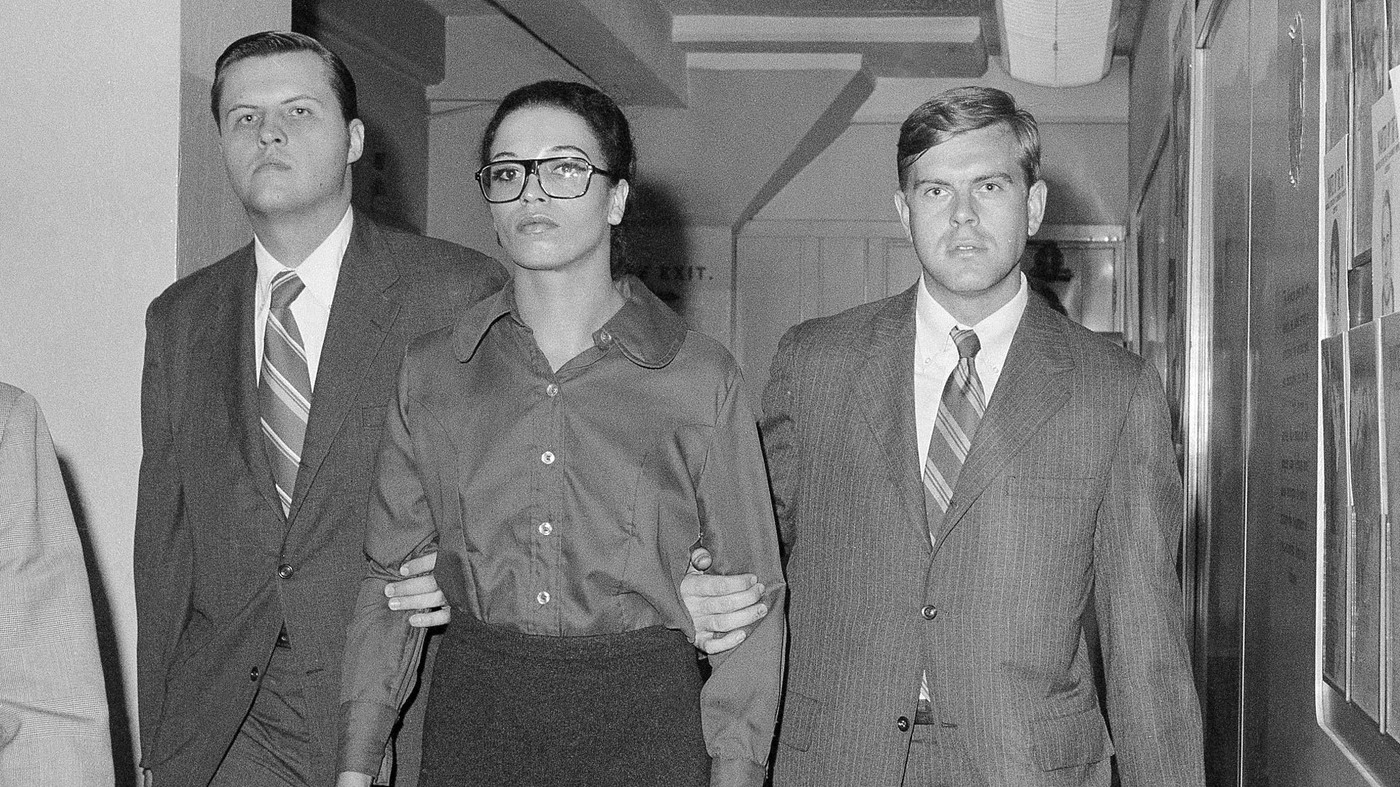 Angela Davis is escorted by two FBI agents after her arrest in New York on Oct. 13, 1970. She was taken from FBI headquarters to the Women’s House of Detention.

Angela Davis is escorted by two FBI agents after her arrest in New York on Oct. 13, 1970. She was taken from FBI headquarters to the Women’s House of Detention.

In New York City, in the 20th century, tens of thousands of women and transmasculine people were incarcerated at the so-called House of D, a brutal women’s prison that opened in Greenwich Village in 1932. Author Hugh Ryan says that in many cases, the prisoners were charged with crimes related to gender-nonconforming behavior.

“Drunkenness, waywardism, disobedience to their parents, being out at night by themselves, wearing pants, accepting a date from a man, accepting a ride from a man,” Ryan says. “All of these things could have gotten you arrested if you were perceived as the ‘wrong kind of woman.'”

In his new book, The Women’s House of Detention: A Queer History of a Forgotten Prison, Ryan writes about the prison, and about the role it played in the gay rights movement of the ’60s, including the Stonewall Uprising of 1969.

“The House of D [was] 500 feet from the Stonewall Inn,” Ryan says. “On the first night of the riots, people incarcerated in the prison could actually see what was happening out their windows, and they started a riot all their own, setting fire to their belongings and throwing them down to the streets below while chanting ‘Gay rights! Gay rights! Gay rights!'”

By the ’50s and ’60s, Ryan estimates, “around 75% of the people incarcerated in the House of D are queer in some way.” In the 1960s, the prison began marking gay prisoners with a “D” for “degenerate,” and placing them into solitary confinement because they were considered a “danger to other women.”

Hugh Ryan is also the author of When Brooklyn Was Queer: A History.

Hugh Ryan is also the author of When Brooklyn Was Queer: A History.

In 1965, 18-year-old Andrea Dworkin arrived at the House of D after being arrested for protesting the Vietnam war. Upon her release, Dworkin, who was white and middle class, spoke out about the violent and dehumanizing pelvic exam she endured upon her intake. Suddenly, Ryan says, the conditions at the prison became a “flash point” for city and state government, and the House of D was eventually shut down in 1972.

“The move to get rid of the House of D and move women over to Rikers basically starts in that moment,” he says, referring to New York City’s main jail complex. “It’s going to happen because of what happened to Andrea Dworkin, but beneath that is a base of this happening to so many other women and trans men whose stories had been told but largely forgotten or ignored or dismissed.”

Constantly I was shocked to see the way in which our system of justice for women simply is unjust and different from the one we have for men. Women’s incarceration is a different situation. It’s not about crimes against people like violence, and it’s not about crimes against property like theft. It’s about social control. And in fact, the origins of our women’s prison system come about in the 1870s, right after the Civil War. Right at the same time, the census is asking about women’s employment for the first time. If you go back to that moment, that 1870s moment, what we see is that a system that had mostly been intended to punish the violent, anti-social acts of white men gets repurposed for social control over Black people of all genders and women of all races and all of these things that weren’t considered crimes or were considered maybe something you would get a fine for or a citation suddenly become vectors for incarceration when they’re applied to Black people and to women.

From the moment we have these stand-alone women’s institutions, they are focused on this idea of creating proper feminine subjects. And this is a moral imperative, but it’s also economic. In this time period, it was thought that there were really only two roles that a woman could have that would get her out of poverty: being a wife or being a maid. Both of those things required you to be properly feminized.

So the prison system, understanding that women were often being arrested because they were poor, tries to remold them into “proper” women, who will not be arrested for being poor because they will be able to have these jobs and they will be good people.

For men, the prisons try to make you a good citizen. But for women, the prison tries to make you a good woman — and that’s a very different thing. And that is the reason why so many gender-nonconforming people, why so many queer women, lesbian women, butches, studs, trans men get caught up in the prison system, because for those people who are concerned about the lives of incarcerated and formerly incarcerated people, queerness was seen as a threat to ever being a normal, healthy, happy, productive member of society.

On arresting women and gender-nonconforming people for their clothes

That law actually dates back to the mid-1800s. It’s … still on the books and it’s still being used. Originally, it criminalized people who dressed in costumes to protest tax collectors — upstate farmers, mostly. In the late 1800s it starts to get used to target queer people, particularly those who are gender non-conforming in some way. The law says it is only illegal to dress in a “costume” if you’re in the act of committing another crime. … But that’s not how the law gets applied. In the 20th century, it gets used to target gay men, trans women, lesbians, trans men, anyone who dressed “incorrectly” for their gender. The law not only gets used then, but during Occupy Wall Street. That’s the law that gets used to arrest protesters for wearing masks or other costumes while protesting.

On women and queer people being incarcerated for “waywardism”

The first waywardism laws in New York State start in the 1880s and they only apply to girls and women, originally ones who are arrested for prostitution and then expanded greatly in the late 1800s to women who might become prostitutes. And that’s where they really get into danger, right? Because suddenly the charge of prostitution has nothing to do with sex work or exchanging sex for money. Instead, a wayward girl is anyone who was thought to be improperly feminine to the point where she has an invitation to prostitution. She’s either too sexual or she’s too masculine and unable to get any other kind of job. So of course she’s going to end up being a prostitute.

Waywardism could be brought against you by the police, but also your parents could have you incarcerated for waywardism without ever being tried. The law didn’t get applied to men and boys until the 1920s. Women have been vastly subjected to waywardism laws because they were seen as a threat to men. Women who were sexually active, who might be prostitutes, were likely to spread sexually transmissible infections, in the eyes of the law. And so the waywardism law gets used over and over again to target all kinds of women. Women who speak back to their parents, a lot of runaways get targeted under waywardism laws, anyone who is truant, perhaps, or anyone who shows signs of being a disobedient or masculine woman.

On the unnecessary, painful gynecological exams at the prison

There are all of these forced genital examinations every single time you come in and out of the prison. And sometimes those are performed by men who would ask these really uncomfortable, really gross questions about virginity and who [the prisoners] were sleeping with. … The gynecological exams in the prison were for several purposes. First, there was a thing called “The American Plan,” which was checking to see if any arrested women had an STI so that she would be held until she was forcibly cured. And then they were also checking for any kind of contraband coming into the prison: drugs, weapons. In the 1950s after a riot, I think in 1958, a new warden comes in and he actually does a study on these pelvic exams and these genital searches and these forced enemas, and he notes that no contraband has ever been found. Twenty years of these needless, violent searches that women had been protesting since the very day the prison opened, and they had never found a single thing. And those searches are still being performed today on people in women’s prisons.

Sam Briger and Seth Kelley produced and edited this interview for broadcast. Bridget Bentz, Molly Seavy-Nesper and Meghan Sullivan adapted it for the web.