A sixth child injured during Thursday’s jumping castle tragedy in Tasmania has died on the day the site was visited by a survivor who paid tribute to his classmates.

Eleven-year-old Chace Harrison died on Sunday afternoon after his life support was turned off, police confirmed.

Chace is the sixth victim of Thursday’s event, when a jumping castle became airborne at end-of-year celebrations at Hillcrest Primary School in Devonport, in the state’s north-west.

Of the nine children involved in the incident, two remain in a critical condition at the Royal Hobart Hospital, and one is recovering at home.

On Sunday, Beau, one of the survivors, visited the site where floral tributes lined the verge of the school.

With both arms in bandages, Beau was supported by his mum Tammy as they laid gifts of gaming controllers and soft teddies in memory of his friends.

The news of Chace’s death and Beau’s visit came on a day of heartbreaking scenes, as the community continued to struggle with the loss of young lives.

Speaking at a press conference on Sunday, Police Commissioner Darren Hine extended his condolences to the families involved in the accident.

“Our thoughts continue to be with his family and all other families and the loved ones of the children involved,” he said. 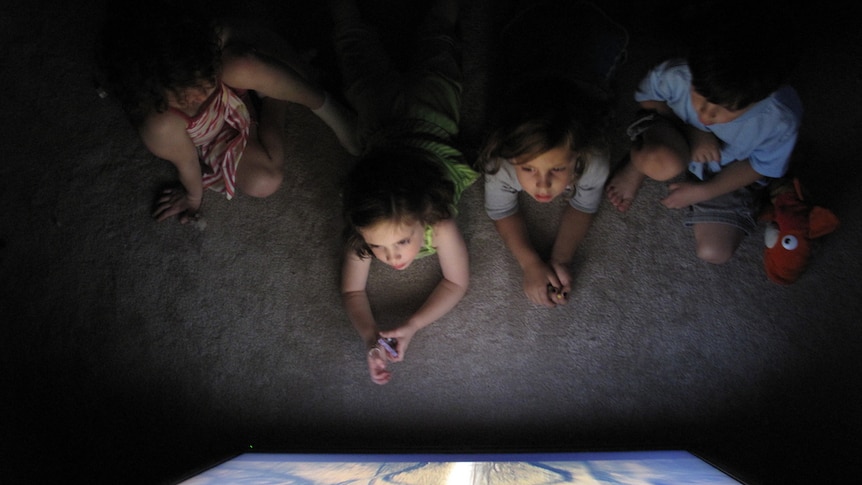 Rolling media coverage of tragic media stories can be difficult for children to understand. But there are ways you can help them cope.

Commissioner Hine said interstate help is on the way as officers continue to investigate the incident.

“Given the magnitude of this critical incident and the need to speak to a large number of traumatised children within a short period of time, we have accepted an offer from NSW Police to assist in conducting interviews,” he said.

The community of Devonport is still reeling from the jumping castle tragedy.

Heartbroken relatives of the Hillcrest Primary School students killed and injured in Thursday’s incident — along with wellwishers — have overwhelmed the site with tributes, cards and other items expressing their sympathies.

Today, a relative of one of the students was seen hugging a tree, at the location where the inflatable equipment eventually came to rest.

Paramedic staff have also visited the site where the jumping castle became airborne.

The circumstances of the tragedy — and whether proper precautions were followed — is still being investigated.

Nine children fell from a height of about 10 metres, due to what eyewitnesses have told police was a gust of wind.

The school had been holding an end of year celebration, with the jumping castle and zorb balls — large enough for people to climb inside — part of the festivities.

Tasmanian Police, WorkSafe Tasmania and the coroner have begun an investigation into the incident that is expected to take “quite some time.”

The tragedy has also lead to an outpouring of grief and a flood of support from all over the country.

Hawthorn and Richmond will also play an AFL pre-season match in the state’s north-west in March, to raise funds for the victims and the wider community.

Set the ABC News website or the app to ‘Tasmania Top Stories’ from either the homepage or the settings menu in the app to continue getting the same national news but with a sprinkle of more relevant state stories.

Here’s a taste of the latest stories from Tasmania: