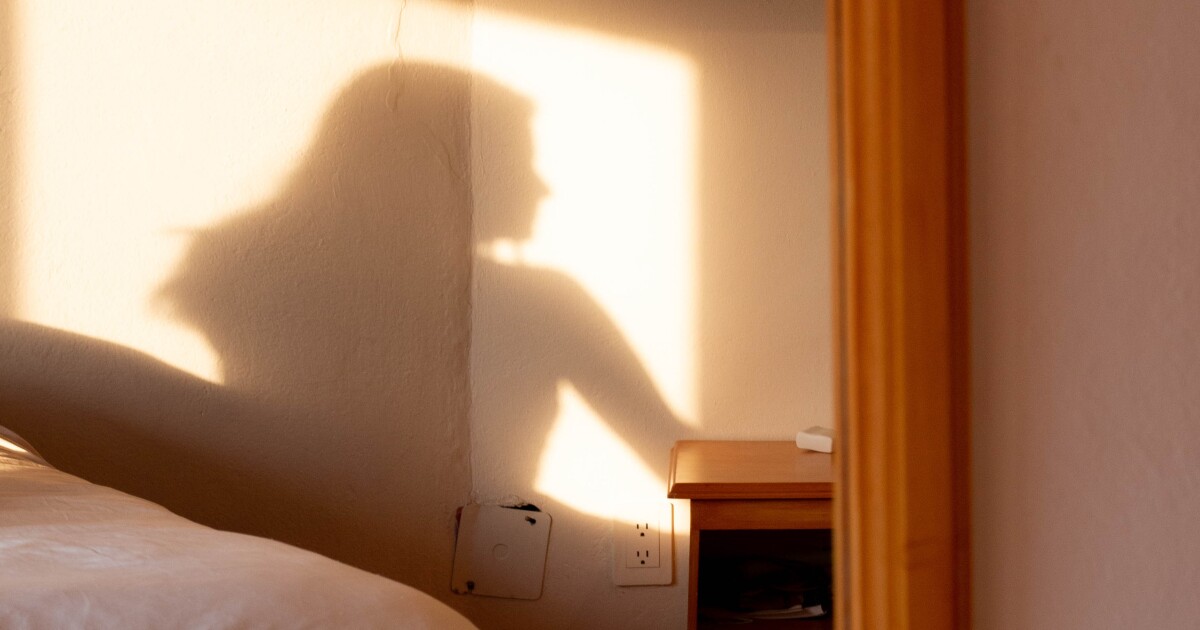 Elena Cauduro Perez was finishing high school in 2019 when she took a home pregnancy test and it was positive.

She scheduled an abortion at a Mexico City hospital where her boyfriend’s sister worked. But heavy traffic slowed the drive from her home in the state of Morelos, and she missed her appointment.

Searching online for an alternative, Cauduro found a clinic that offered her an abortion for less than $100. The woman who opened the door walked her into the back for an ultrasound — which showed she was five weeks along — then handed her a plastic model of a fetus and began to explain the sanctity of life.

The clinic was part of the Centro de Ayuda para la Mujer Latinoamericana (Help Center for the Latin American Woman), a nonprofit whose primary purpose is to prevent abortions.

Known as CAM, the organization works largely incognito at time when legislation and court rulings are rolling back abortion restrictions across Latin America. In Mexico last month, a Supreme Court decision opened a path to nationwide legalization.

The group finds women like Cauduro in two ways. Its volunteers park vans outside legitimate public abortion clinics, leaving the impression they are working together, and ask the women in line to come inside for free ultrasounds. It also runs clinics that advertise abortions but don’t offer them.

Once staff members have a woman’s attention, the pressure campaign begins, according to accounts from several women interviewed by The Times.

“I thought it was normal that she would try to convince me not to have an abortion, but it got too extreme,” Cauduro recounted.

Left alone to watch a graphic video of an abortion being performed, she closed her eyes. But panic washed over her as the narrator described the procedure and dramatic music played in the background.

In the meantime, the woman in charge tried to persuade Cauduro’s boyfriend in the waiting room that they were making a grave mistake.

Cauduro insisted that she wanted to end her pregnancy, only to be told the clinic had run out of abortion pills.

CAM was founded in 1989 as a project of the Mexican antiabortion activist group Comité Nacional Pro-Vida.

Abortion was illegal across Mexico except in rare cases such as rape. Many were being performed anyway, sometimes under dangerous conditions.

Pro-Vida set up clinics that offered pregnancy services such as free ultrasound, but the main goal was to make contact with women wanting abortions in hopes of stopping them.

The clinics ran advertisements such as “Are you pregnant and need help?” according to Salvador Frausto, co-author of a 2008 book about Jorge Serrano Limón, a staunch Catholic who founded CAM when he was the leader of Pro-Vida.

Frausto said that the organization expanded dramatically around 2002 with hundreds of thousands of dollars in funding from the federal government after conservatives won the presidency and the legislature. Antiabortion groups in Europe and the United States also contributed.

Serrano Limón, who could not be reached for comment, was forced to resign as the head of Pro-Vida in 2005 after he was unable to account for more than $2 million in public funds meant for construction of clinics. He later said in interviews that the money was used to support low-income women who had decided to continue their pregnancies.

CAM redoubled its efforts in 2007 after Mexico City shocked the rest of the country by legalizing abortion in the first 12 weeks of pregnancy.

The group launched a program called Operation Rescue — after the U.S. antiabortion group with the same name — which sent volunteers to hospitals to lure away women who had come for abortions.

Meanwhile, the country’s abortion rights movement continued to gain ground. More than 230,000 abortions have been performed at public clinics in Mexico City since 2007, and in the last two years, the states of Oaxaca, Veracruz and Hidalgo have also legalized the procedure.

The recent Supreme Court decision struck down an antiabortion law in the state of Coahuila and said it was unconstitutional to prosecute anyone for abortion before 12 weeks, setting the stage for legal battles that could eventually force all states to lift their bans.

Headquartered in Mexico City, CAM describes itself as a “network to defend human lives from conception to death in accordance with Catholic law” and says it “aims to help the pregnant woman who has decided to have an abortion to choose freely to accept her maternity and protect and preserve her dignity.”

Leaders of the group have generally declined to talk with reporters and did not respond to multiple interview requests from The Times.

On its website, it claims to have 70 clinics in Mexico and 130 throughout the rest of Latin America and the Caribbean. The website does not give the names or the addresses of the clinics.

The Times identified four of them in Mexico City and three others in the states of Mexico, Sonora and Guerrero. The Sonora clinic had a small sign on the door that said CAM, but none of the others gave any indication of their affiliation.

The clinic Elena went to had a small pink sign next to the front door that said “ILE” — which in Spanish stands for Legal Termination of Pregnancy and is how clinics in Mexico refer to abortion.

The Times identified six websites and four Facebook pages that appear to be for different clinics in Mexico but all direct people to the same phone number for scheduling appointments — the same one that Cauduro called to make her appointment.

With names including “Termination of Pregnancy” and “Secure Abortion,” the websites advertise “legal and safe abortion” and say the decision is “your choice.”

“Your best alternative if you decide to terminate your pregnancy and you live in Mexico City,” says one Facebook page.

Another — “I’m pregnant but I don’t want it” — advertises “freedom of choice, solutions, safe abortion and necessary abortion.”

It was still dark on a recent morning as several women lined up outside the Centro de Salud México España — one of 14 public clinics and hospitals that provide abortions in Mexico City — waiting for the doors to open at 7 a.m.

Parked outside were two white vans emblazoned with the logo “DeSíde” — a combination of the words for “decide” and “yes” — and a picture of a woman holding a pregnancy test, a toll-free number and promises of “free termination of pregnancy,” “absolute discretion,” “free ultrasound” and “immediate help.”

The vans arrive each weekday at 5 a.m. and stay for about three hours.

A middle-aged man was going down the line handing out flyers that said abortion can cause infertility and kill a pregnant woman. He acknowledged to a reporter that he and three co-workers were from CAM, but he declined to be interviewed.

A female colleague, who wore a blue jacket with the “DeSíde” logo and a name tag, was approaching women as they arrived.

One of them was Ana Cristino, 26, who had come on a motorcycle with her boyfriend. She later said that the woman in the blue jacket left her with the impression that she worked for the clinic and that a stop in the van was part of the intake process.

That was how Cristino wound up inside one of the vehicles, where she was given an ultrasound, told she was carrying twins and made to watch a video of an abortion.

“God wouldn’t give twins to everyone,” the woman who performed the ultrasound told her. “You are a chosen one. I’m going to pray for you.”

None of it was enough to convince Cristino to change her mind. But by the time she left the van, the abortion clinic had reached its daily capacity and stopped letting in more patients.

She returned two days later and had the procedure, learning that she had been carrying just one fetus, not twins.

The people who work at Mexico City’s public abortion clinics are used to the presence of the CAM outside their doors.

In an interview earlier this year, a spokesman for the health department said the vans can’t be forced to leave because they are on public property and suggested that CAM has little influence on most women.

“They are properly informed inside the clinic and they are free to make any decision,” said the spokesman, Hector Barragán, who has since left his job.

Most of the public abortion clinics post signs saying that “the modules outside this institution don’t belong to the health department.” But CAM often intercepts the women before they see the signs.

Realizing that she had been tricked, Cauduro grabbed her purse and stormed out of the CAM clinic, still pregnant.

She immediately called the Centro Médico Mujer, a private Mexico City clinic that she had found during her original online search but decided against because of the price — about $250.

There was a slot available that afternoon. In the waiting room, she was still shaken and crying as she explained to another patient what had just happened.

That patient went first, then waited for Cauduro, just to make sure she was all right. The procedure took less than 15 minutes.

Six months later, she received a call from a number she didn’t recognize. It was the CAM clinic, wanting to know if she had continued with her pregnancy.

Cauduro, who had hoped to forget the experience, railed into the phone, vowing to take action against the clinic.

She was still thinking about it a year later when she discovered online testimonies from other women who had been to the same clinic and had a similar experience.

It was then that she decided to publicly tell the story of her first attempt to get an abortion. The Twitter thread she created was shared more than 40,000 times.

“It was one of the worst days of my life,” she wrote. “A lot of women are going through this and I want to stop this from happening to others.”

Avila is a special correspondent.