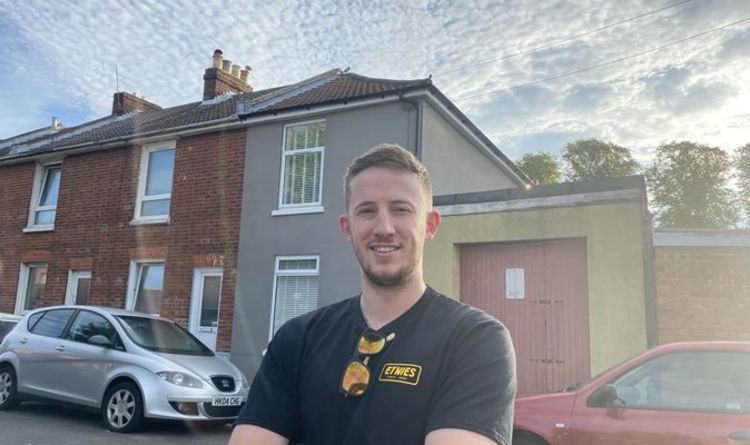 Kyle Mattison, who has a full-time job in marketing, bought his first home at the age of 24 and invested in a further three properties. He spoke exclusively to Express.co.uk and provided insight into becoming a property investor in his twenties, while sharing some useful tips on the most cost-effective ways for homeowners to boost their property value.

“I knew it wasn’t going to be a forever home, but I needed something to get onto the property ladder,” he said. “When I was living there, I kept looking at the market and thought, ‘I don’t want to live in a two-bed flat for the rest of my life, if I do a little bit of work, I could probably sell it for a target profit and then look for a house’”.

After carrying out some basic DIY work, which cost a few hundred pounds, Kyle decided to sell the property, which fetched £134,000 on the market.

Despite a modest profit, the sale enabled Kyle to buy a house for £160,000, which he moved into while renovating. Apart from the kitchen, the whole house required renovating, with a new bathroom, plastering and decorating among the jobs carried out. In total, the project cost between £9,000 and £10,000.

Instead of selling the property, Kyle decided to turn the home into a rental property, which involved remortgaging the house. Having managed the property himself, he has saved a considerable amount on lettings fees.

While Kyle was able to carry out some of the work himself, specialist jobs, including plastering and installing the bathroom fittings, required appointing professional tradespeople.

DON’T MISS:
Property: Bathroom fittings that will add £50k to your house value [INSIGHT]
10 shopping centres that could be decreasing house prices – graphic [INFORMER]
How to add value to your home – five ways to add £40k to price tag [EXPLAINER]

“There are some jobs that are best left to the professionals if you want a good finish,” he explained, adding that he had learnt a range of new skills, including basic carpentry, tiling, laying laminate flooring and hanging doors, from watching DIY videos posted on social media.

Reflecting on his decision to sell rather than let it out, Kyle explained that the cost of the monthly fees on the leasehold were too high, adding: “It was better to sell, recoup the money and put that into my next project.”

Kyle’s latest project, which has been his most challenging so far in terms of scale and cost, involved a renovation of a two-bedroom house, which he purchased for £148,000, and spent £30,000 sprucing it up.

After buying the property, the 29-year-old discovered damp problems and a leak in the roof, which required urgent repair work. The house had to be rewired and some of the load-bearing wall was knocked down to create an open plan kitchen-diner. The garden was professionally landscaped for £6,000 and was documented on TikTok via Kyle’s social media account, and it has gained more than nine million views.

Kyle has decided to turn the house into a rental property, but it has received a house valuation of £220,000, which would provide a healthy profit of £42,000.

He said: “Some people may not necessarily like that it’s all white walls, but it leaves it as a blank, open canvas,” adding that it enabled prospective buyers to “envisage living there”.

“Issues like damp and mould are obvious things and if the house is untidy, try and rectify that,” explained Kyle, who regularly posts videos offering home improvement tips on his TikTok account.

A modernised kitchen or bathroom could add substantial value to a property, said Kyle, and if it isn’t feasible to renovate both rooms, he suggested focusing on just one.

When sourcing DIY supplies, Kyle suggested shopping online as they can prove to be “significantly cheaper” he said, compared to store prices. When looking to appoint a professional tradesperson, Kyle advised on gaining at least three quotes to prevent being overcharged.

Next on his project list, Kyle plans to purchase a home as a buy-to-let, along with a two-bed flat on the seafront, which he plans to rent out on Airbnb.