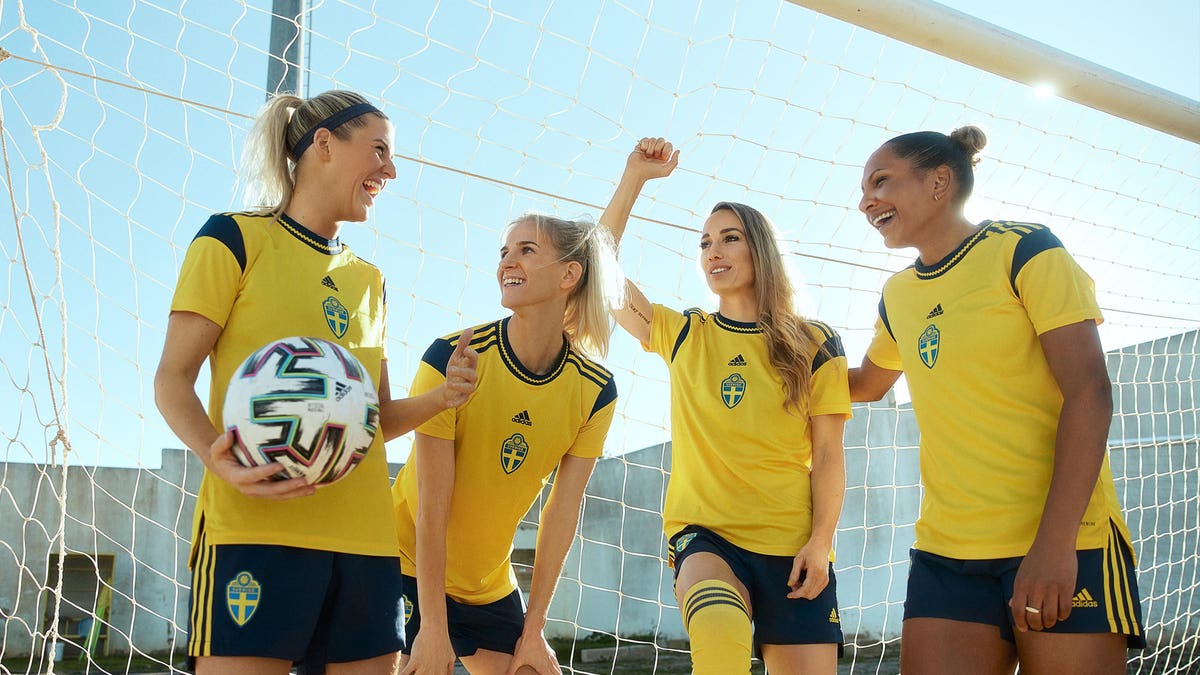 The highest-ranked European women’s soccer team in the world, Sweden, have today unveiled their new jerseys for the UEFA Women’s Euro in England. In a unique marketing ploy, the kits come printed with a guide on the team’s tactical style and player’s strengths, so confident are the squad of performing well this summer.

The first European champions in 1984, Sweden has not won a major international title since then. However, their team is consistently one of the top performers on the world stage, Bronze medalists at the last FIFA Women’s World Cup in 2019 and Silver Medalists at the last two Olympic Games. They have worn shirts produced by German firm, adidas, the largest sportswear manufacturer in Europe, since 2013.

The printed guide on how to stop the team is displayed on the inside of the shirt collar. It advises that “first of all, Sweden is one of the fastest-playing teams in the world and also one of the very best at counter-attacking, do everything you can to reclaim the ball once you lose it. . . try to force the Swedish players down the sidelines and close them down aggressively.”

Arsenal striker, Stina Blackstenius, reveals “in the analysis, we expose exactly how we win, how we play and how the opposing teams – perhaps – have a chance to stop us. Our team is better than ever, and we enter the Euro’s with grit and confidence. This summer, we hope the Swedish people stand together with us, it’s an important time for our team.”

Along with the jersey, the Swedish Football Association (SvFF) have released a digital guide, How To Stop Sweden, written by the team’s own head analyst, Anders Eriksson. It highlights 31 leading players in the team and gives advice on how opponents should play in order to stop Sweden this summer. He explained, “the digital analysis of the team and the individual players is a hint to the opponents. Now, they can simply buy the football jersey to have a chance to challenge them in the UEFA Women’s Euro.”

As well as a tongue-in-cheek promotion, the shirts are a nod to the country’s reputation as one of the most progressive democracies in the world. Marketing and Sales Director at the Swedish Football Association, Helena Taube Rehnmark, remarked, ”Sweden is a country famous for its transparency and openness, and that’s very much manifested by this jersey and the guide. But the jersey is as much about just celebrating our national team – coming in as one of the favorites this summer, we’re looking to make it a long summer and come back with the gold.”

This is not the first occasion in which the Swedish Women’s National Team and adidas have teamed up to create headlines for the messages they have displayed on their jerseys. Ahead of the previous UEFA Women’s Euro in 2017, Sweden took to the field at the Algarve Cup in shirts with the player’s names replaced by words which “inspire and motivate women to show that everything is possible.”

In the traditional Swedish colors of yellow and blue, the design of the new jersey is inspired by Sweden’s sea coast, with a wavy silhouette around the neck that reflects the shape of Sweden’s coastline. The new kits will be available from Thursday when the team will play in them for the first time during a World Cup qualifier away to Georgia.

The limited-edition jerseys with complete team analysis will be sold exclusively on the Swedish Football Association website.