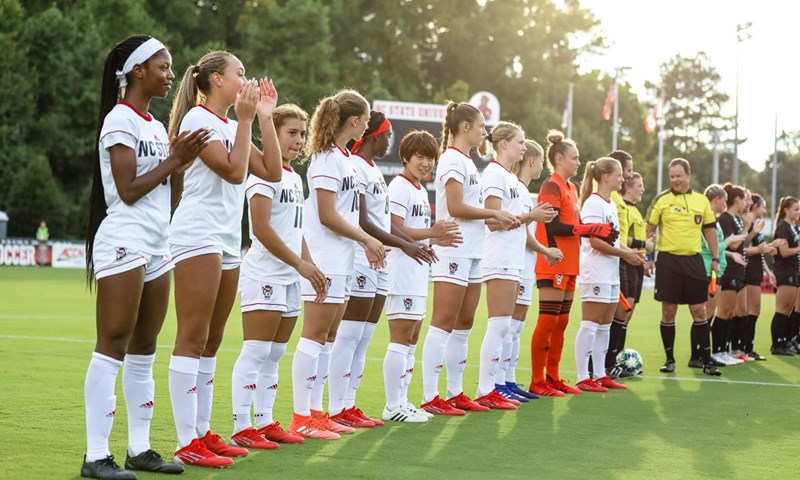 Five ACC Teams Ranked in United Soccer Coaches Poll
– Headlined by three of the nation’s top-four teams for the fifth consecutive week, five ACC teams are ranked among the top 25 of this week’s United Soccer Coaches Poll – the most of any conference.
– Florida State is ranked No. 1 for the sixth straight week, followed by No. 2 Duke, No. 4 North Carolina, No. 7 Virginia and No. 22 Clemson.
– Additionally, Notre Dame, Pitt and Virginia Tech are receiving votes.

Stellar Start for ACC Women’s Soccer
– ACC women’s soccer teams have enjoyed a stellar non-conference portion of the 2021 season, as the league’s 14 teams have combined to compile an 80-16-5 record – the most wins and best winning percentage of any conference.
– Four teams remain unbeaten heading into the start of ACC play this week: Duke (7-0) and Florida State (8-0).
– ACC teams have combined to compile 44 shutouts, including 16 on the opening weekend and 12 wins against ranked opponents.
– ACC teams also outscored their non-conference opponents, 278-73.

ACC Goalkeepers Among Nation’s Elite
– Several ACC goalkeepers are ranked among the nation’s best in the NCAA’s career statistics.
– Virginia’s Laurel Ivory leads all NCAA Division Goalkeepers in career shutouts with 37 and minutes played at the position with 7,882.75.
– North Carolina’s Claudia Dickey paces the country in goals against average (0.49).
– Louisville’s Gabby Kouzelos is fifth in career shutouts with 29, while Dickey is tied for eighth with 25. The ACC’s three among the top 10 are the most of any conference.

Winningest Active Head Coaches
– Four ACC head coaches are among the top 10 in NCAA Division I for most victories by an active head coach.
– Longtime UNC skipper Anson Dorrance leads the way with 896 wins, while Florida State’s Mark Krikorian is fifth on the list with 465.
– Virginia’s Steve Swanson is sixth with 441, while Pitt’s Randy Waldrum is eighth with 427 career victories.
– The ACC’s four coaches among the top 10 are the most of any conference.

ACC Places 10 on Mac Hermann Trophy Watch List
– The ACC leads all conferences with 10 women’s soccer student-athletes on the 2021 MAC Hermann Trophy Watch List.
– The Hermann Trophy, presented annually by the Missouri Athletic Club, is the nation’s highest individual honor recognizing the National Player of the Year as determined by the voting of Division I coaches, who are members of United Soccer Coaches.
– Last season, Florida State’s Jaelin Howell became the 15th student-athlete from a current ACC school and second from the FSU program to win the prestigious honor. All three 2020-21 MAC Hermann Trophy finalists were from the ACC, as the Seminoles’ Malia Berkely and North Carolina’s Brianna Pinto were the other two finalists.

Florida State Picked to Repeat as ACC Women’s Soccer Champion
– Florida State has been voted the preseason favorite to win the 2021 ACC women’s soccer title by the league’s head coaches.
– The Seminoles, who advanced to their 11th NCAA Women’s Soccer College Cup last season and played for the national championship, received 11 first-place votes and tallied 167 points.
– North Carolina collected two first-place votes and 155 points to finish second in the voting, while Virginia earned 148 points and one first-place vote to occupy third. Duke and Clemson round out the top five with 129 and 124 points, respectively.

– For the 15th consecutive year, the ACC leads the way among FBS conferences in the “Best Colleges” rankings released by U.S. News & World Report.
– Notables from this year’s rankings:

ACC, Big Ten & Pac-12 Announce Alliance
– On Aug. 24, the ACC, Big Ten and Pac-12 announced an historic alliance that will bring 41 world-class institutions together on a collaborative approach surrounding the future evolution of college athletics and scheduling. The alliance – which was unanimously supported by the presidents, chancellors and athletics directors at all 41 institutions – will be guided in all cases by a commitment to, and prioritization of, supporting student-athlete well-being, academic and athletic opportunities, experiences and diverse educational programming. The three conferences are grounded in their support of broad-based athletic programs, the collegiate model and opportunities for student-athletes as part of the educational missions of the institutions.
– ACC women’s soccer teams have played 15 matches against teams from the Big Ten and Pac-12 conferences.
– The ACC owns a 6-2-2 record against the Big Ten and a 5-0 mark versus Pac-12 opponents this season.

ACC & the NCAA Championship
– The ACC has 54 appearances in the College Cup – the most of any conference (the next closest conference is the Pac-12 with 27 appearances). Current membership combines for 66 appearances.
– The ACC’s five teams in the Elite 8 of the 2020 NCAA Tournament were the most of any conference and no other conference had more than one representative. The five ACC teams were the second most in the history of the league behind an NCAA-record six teams in the quarterfinals in 2013.
– Additionally, three of the four teams in the 2020 NCAA Women’s Soccer College Cup were from the ACC, including top-seeded Florida State, second-seeded North Carolina and Virginia.
– It marked the third time that three ACC teams have been in the College Cup, matching the total from 2013 and 2011.
– Florida State defeated Virginia on penalty kicks to advance to the national championship for the fifth time in program history. Additionally, it marked the 44th appearance in the national championship by a current ACC team.
– The ACC has had a team in the Women’s College Cup in 38 of the past 39 NCAA Tournaments and in each of the past 15 years.
– Current ACC membership combines for 26 NCAA Division I Women’s Soccer Championships. North Carolina owns 21 NCAA titles and Florida State owns two, while Notre Dame won three prior to joining the league in 2013.
– Eight different ACC institutions have represented the league at the College Cup (Boston College, Duke, Florida State, North Carolina, NC State, Virginia, Virginia Tech and Wake Forest) since 1982.
– The ACC tournament champion has gone on to win the NCAA Women’s College Cup 16 times, most recently Florida State in 2018.