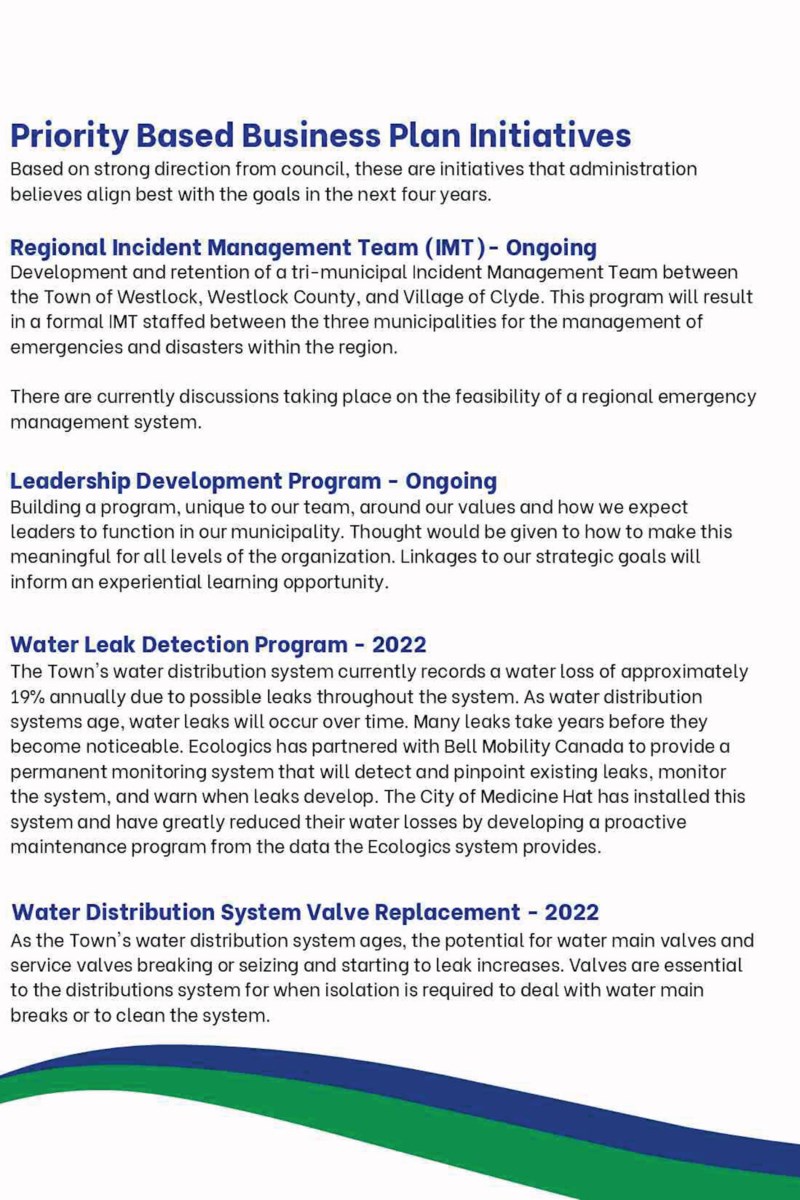 WESTLOCK – Fourteen initiatives spread over the next three years including a public art plan, collecting local sports memorabilia for display and a recognition program aimed at the employers of volunteer fire fighters, are part of the Town of Westlock’s newly-crafted, priority-based business plan.

Unanimously accepted as information by councillors at their April 19 committee of the whole meeting, the eight-page document was crafted by CAO Simone Wiley and “sets out an integrated roadmap” to meet council’s priorities and provide services to residents, businesses, and visitors, while “effectively and creatively responding to the opportunities and challenges facing Westlock.” Although it’s a public document, Wiley said it’s intended largely for administration’s use while informing “the public on what our medium-term plans are” as these are “new things we’re not doing now.”

“There’s some good stuff on there, I’m looking forward to seeing how it all plays out,” said mayor Ralph Leriger.

The document also states administration’s excellence goal, “We continuously seek to provide the most possible to our community” while listing their values — teamwork, fun and respect — and the municipality’s five strategic goals.

“As we worked our way through our priority-based budgeting tool and started to collect initiatives and have discussions as an administrative team we put together this business plan,” Wiley explained. “It was a new process to us and I think the next go round I’ll do it a little differently. We did it in bits and pieces and it was spread over quite a length of time and it felt like a lot of start and stop to me and I would have liked it to have flowed a little better than it actually did.

“But I still think the initiatives we came up with are good and fit in with council’s goals and with our administration goals. I just think our process could have been better.”

While funding for the 2022 initiatives is in place, council will have to decide going forward how much they dedicate as Wiley told them they’ll “definitely see this document at budget time as there’s no money set to any of these things.” She went on to explain that she broke them up in terms of priority and how much time administration could dedicate to each.

“And one department could have them all in one year so you have to spread them across departments as well,” said Leriger, specifically singling out the public art and pedestrian planning programs as ones he’s looking forward to.

“There were some things that didn’t make the list yet and I know they’re coming up, but we just weren’t ready to include them yet. I do see this as changing and morphing,” Wiley added.

Current initiatives include formation of a regional incident management team between the town, Westlock County and Village of Clyde and a town-centric leadership development program around “our values and how we expect leaders to function in our municipality.”

“Right now, we just released as a region a request for proposal on emergency management so that fits into that a little bit. And it will be ongoing, so that’s why there’s no real time attached to it as there are partners we have to take into consideration,” Wiley explained.

The coming year includes the $80,000 water leak detection program as in 2021 the town lost 20 per cent ($276,270) of all the potable water it paid for from the regional water commission.  Also on tap is a water distribution system valve replacement program and plans to recognize the employers of the town’s volunteer fire firefighters who Wiley said, “give a lot to the community in allowing staff to be volunteers on the department.”

Listed for 2023 is a pedestrian-planning program which looks to make Westlock “more active and pedestrian-friendly” plus address gaps and “prioritize aging infrastructure” while a public art plan looks to “engage community organizations passionate about arts” leading to a public mural and as well as the installation of local art at town facilities. Also planned for next year is the ramping up the municipality’s facility advertising program and a marketing campaign that’ll work in concert with other economic development initiatives. Included for 2023 is a push to collect local sports memorabilia as “it won’t be just sticking a display case in the Spirit Centre … as there’s a lot of sports history we need to recognize in our community.”

For 2024, the plan contemplates formation of a regional hazardous materials response team, a regional technical rescue team and a facility preventative maintenance program which will tie into the municipality’s asset management program. An equity, diversity and inclusion program is also listed for 2024, with Wiley admitting she needs to gather more information, “to understand what it looks like for us an organization.”